(Book Review) In God We Trust: All Others Pay Cash by Jean Shepherd 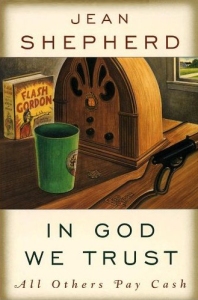 dled so thickly in winter clothing that he has to waddle with his arms outstretched.

Red-Ryder BB guns that will shoot your eye out.

A Christmas Story.  I don’t have an actual childhood memory of watching the movie, but I’ve understood for years that it was quite dear to people’s hearts. My older sister, when recounting the day when I was 4 and I fell/she pushed me down the stairs (depending, of course, on whom you ask), will tell people I looked like “that kid from that Christmas movie, all bundled up in his clothes, so much that he couldn’t put his arms down,” and people instantly know what she’s talking about and lose themselves in sharing their favorite scenes.  The movie that has become holiday tradition for many was created by Jean Shepherd, based in part on the entertaining book In God We Trust: All Others Pay Cash. Shepherd was a man of many talents – he worked in radio (starting in broadcast radio in Cincy before broadcasting in New York City for two decades, sometimes appearing on NPR’s All Things Considered), worked in television and film (PBS aired several tv movies based on his stories, and he wrote and narrated the above-mentioned A Christmas Story), did live readings and performances at several colleges, and wrote dozens of short stories – many of which were turned into books, the first of which is In God We Trust: All Others Pay Cash.

Through my brain nightly danced visions of six-guns snapped from the hip and shattering bottles — and a gnawing nameless frenzy of impending ecstasy. Then came my first disastrous mistake. In a moment of unguarded rashness I brought the whole plot out into the open. I was caught by surprise while pulling on my high-tops in the kitchen, huddled next to the stove, the only source of heat in the house at that hour of the morning. My mother, leaning over a pot of simmering oatmeal, suddenly asked out of the blue: “What would you like for Christmas?”
Horrified, I heard myself blurt: “A Red Ryder BB gun!”
Without pausing or even missing a stroke with her tablespoon, she shot back: “Oh no. You’ll shoot out one of your eyes.”
It was the classic Mother BB Gun Block! I was sunk! That deadly phrase, used many times before by hundreds of mothers, was not surmountable by any means known to Kid-dom.
–page 30

A confession (to Bookish members preparing to read the book, as well as to the rest of you): I had a difficult time “getting into” Shepherd’s voice early on. While I enjoyed the book, I found myself terribly tempted to skim over lines at a time, until we got to the next thing that “happened.” This lasted until the Red Ryder BB gun story, when I could hear the voice (Shepherd’s own, actually) from A Christmas Story narrating the story, and I remembered its sweet entertainment. To that end, I’d suggest that if you start losing focus through the stories, you find an excuse to watch the movie (or a clip, if you’d rather), and keep his voice in mind as you read. Maybe it’s only because the book is a collection of Shepherd’s most popular radio stories, but I found the stories itching to be read aloud, and I complied whenever I could.

When Ralphie, the narrator of the book, goes home for Christmas as an adult, he ends up in a bar run by one of his childhood friends.  Over drinks, the two of them swap stories and memories, each one chapter in length. The book’s 31 chapters are made up of these stories and the chapters that divide them, each of which features Flick and Ralphie talking between stories.  As stories with childhood friends and with bartenders tend to be, these are entertaining and lively; Shepherd was a great storyteller, and that comes across clearly in the book. At the same time, there are moments when it betrays its age (the book was published in 1966, when Shepherd was in his mid-forties), describing people and groups with phrasing and jokes that as a culture we’ve (finally, thankfully) come to see as offensive. Even so, because the stories are set so firmly in an older year these things are cringe-worthy, but forgivable.

The book’s setting in time has led to the question of whether or not the stories are from Shepherd’s own childhood, a question which has been the source of some argument.  For the record, despite the book having been described as both  memoir-ish and slightly autobiographical, when Shepherd was alive, he argued the stories were fictional. Related, while many today refer to the book as either a collection of short stories or a collection of essays, Shepherd and his publisher referred to the book as – and marketed it as – a novel. That’s just for the record, though — you’re welcome to create and fiercely defend your own opinion on the matter.

Anyone who has ever experienced a first-degree, Big League, card-carrying dedicated toothache in a major molar at 3 A.M. in the quiet solitude of night has stood at the very gates of Hell itself. There are no words in the language that can adequately describe the ebbing and swelling, ebbing and swelling and then rising to even greater heights, then again deceptively receding, only to turn again to the attack; insistent nagging, dragging, thudding, screaming ache of a tooth that has faced more than its share in a hard, rough and tumble lifetime of JuJu Babies, Root Beer Barrels, Jawbreakers, and countless other addictions devoured during the innocent days of childhood. And like all sinners, Orgiasts of all stripes, he looks back upon the very thing that reduced him to a shuddering, denture-ridden, cavity-wracked hulk with bleary-eyed, teary nostalgia. Everywhere, daily, dentists – cackling fiendishly- reap the harvests sown years ago in Penny Candy stores across the land.

Well I remember the Pusher that sent me on that long rocky road that finally led to $765 worth of silver alloy and various plastic compounds which I now carry in my skull as a mute reminder of past, fleeting pleasures. The fillings are not permanent, but the cavities are!
pages 157-158

Consistently across the chapters, the stories are entertaining and a fun look back at a childhood I didn’t live, but can vividly imagine thanks to Shepherd. Whether or not the stories come from Shepherd’s own youth, they offer a wonderful glimpse of history, and perhaps those who lived their childhood in the midwest during America’s Depression years can relate best of all. Whenever it was that you were a child, you should read In God We Trust: All Others Pay Cash. And you who have enjoyed Shepherd’s storytelling in A Christmas Story should especially read this book. If you are horrified at only now learning you’ve transgressed by seeing a movie without reading the book first, you can rest assured it was only a small sin (since not the entire movie comes from the book — only four or so of the stories, though a devoted movie fan could give a definitive number), and add the book into this year’s holiday traditions. And if the book ends up being exactly what you need to get you through Thanksgiving preparations and the family time that comes with it, email me to reserve your spot to discuss it with us at our next Bookish meeting on December 7th.

In God We Trust: All Others Pay Cash is available now at Greenville Public Library.