Illusions of union: The poetry of Cynthia Ventresca

I wake as salt wedged
in the gash of your disgruntlement.
Sheets slice like knives;
the way you turn the other way
as chilly light crawls
across my opened eyes.

Your heart lies on a silver tray
next to my side of the bed.
It bleeds out at night –
sticky red rivers running between
my perfume bottles,
down the dresser,
onto the floor.
You thought I was like a character
in the comics you used to read –
sweetly flawed, celluloid.

But you knew I was dying,
like you,
like everyone,
and in the throes we clutch,
cast off, and over again –
illusions of union.

Our tombs are built
for our aloneness alone.

My bones unearthed, exhumed,
scoured by fever —
I watch two crows fight over a femur.
The winner drags the relic to a corner
of the garden, drops it, then flies away.
It splinters into shards that carry
my decay on the wind of a spring called Macabre.

“All is well,” an eye socket yawns,
“Omnia bene.”
The heart, clotted, still clings to a rib;
it died on a Tuesday in Purgatory.

Days inch into minutes, hours obsolete,
and I wonder how to find tomorrow
where it hid?  How to part a curtain
without my hands, without a heart,
without bones;
one small, weak woman scrubbed into
nothingness.

Cynthia Ventresca lives in Wilmington, Delaware and works in community relations during the day, while pursuing her studies in English at the University of Delaware in her off hours.  She spends as much time as she can writing, with a passion for poetry.  Cynthia’s work has appeared most recently in Third Wednesday, Ted Kooser’s American Life in Poetry, 50 Haikus, and Three Line Poetry. 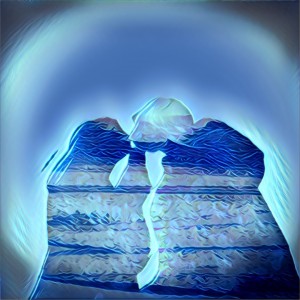 Jim Zola has worked in a warehouse, as a security guard, in a bookstore, as a teacher for Deaf children, as a toy designer for Fisher Price, and currently as a children’s librarian. A published poem and photographer, his publications include a chapbook — The One Hundred Bones of Weather (Blue Pitcher Press) — and a full length poetry collection — What Glorious Possibilities (Aldrich Press). He currently lives in Greensboro, NC.