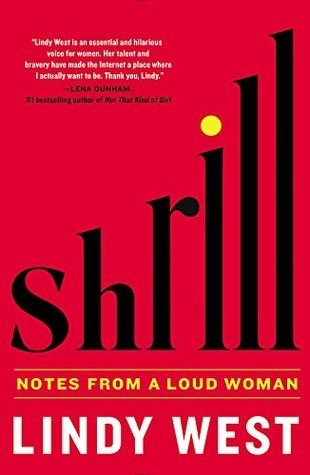 I was a very law-abiding child. When I was growing up, my dad was a policeman and I was terrified of breaking any laws in case he had to arrest me; imagine the family shame! One day, however, I committed what remains the great crime of my life. I accidentally stole a bead. Wait, don’t run off to the feds; I was in a bead shop, browsing the merchandise (spoiler: it was all beads) and didn’t realize a bead had fallen into my shoe until I got home. Mortified, I confessed to Sergeant Dad and held my hands out for cuffing. I think he is still laughing, twenty years later.

Reading Lindy West’s Shrill, I discovered I am not alone in my childhood life of crime, although, in her case, the crime was deliberate, if just as innocuous; West’s tale of shoplifting a single bean from a food store had me laughing almost dangerously loudly. We are kindred spirits, Lindy and I.

Shrill is not, as you may be thinking, a tell-all crime memoir; rather, it’s a collection of connected essays on feminism, body image and rape culture, with a sideline in endearing tales of a misspent youth. The first third of the book is downright hilarious; if the stolen bean story wasn’t enough, another section from the same chapter, entitled How to Stop Being Shy in Eighteen Easy Steps, recounts West’s short-lived experience of writing terrible press releases for the band Spoon. I laughed so hard I feared the need for hospitalization.

A key topic of Shrill is the expectations society places on women’s bodies; this is a well-covered area in non-fiction of the feminist variety, but West’s particular spin, based on her own body, is somewhat different. Although covered in detail in the chapter You’re So Brave For Wearing Clothes and Not Hating Yourself! (the chapter titles alone are a reason to love Shrill), the idea of being fat permeates every section of the book, from her childhood shyness to the abuse she receives on Twitter for speaking out against rape culture. From the humor of recounting lessons learned in nutrition class – “‘Six almonds’ – all diet advice” – to the horror of being unable to report online trolls whose comments on her being too fat to rape don’t contravene Twitter rules because they aren’t, apparently, threats, West is candid in her discussion of how her body is perceived, how it affects people’s behavior towards her, and how her own feelings have changed.

I also love being fat. The breadth of my shoulders makes me feel safe. I am unassailable. I intimidate. I am a polar icebreaker. I walk and climb and lift things. I can open your jar, I can absorb blows – literal and metaphorical – meant for other women, smaller women, breakable women, women who need me. My bones feel like iron – heavy, strong.

The hilarity of the early chapters is entirely contrasted with the section entitled Why Fat Lady So Mean to Baby Men?, in which West’s frustrations can be neatly surmised with one sentence: “I didn’t set out to make a living writing about being abused on the internet.” Another topic familiar to readers who spend a lot of time with books on feminist issues, as well as to anyone with a Twitter account, West’s depiction of the responses received in the wake of well-publicized rape cases in the US is harrowing, and although there’s no sense of her making herself the hero of the story, it’s hard to read Shrill and not applaud her efforts. I once had the gall to tweet that I was reading a book called Everyday Sexism, and received a number of troll-y comments about whether I needed a boyfriend and how hard my privileged life must be; this is nothing in comparison to the online abuse West outlines, but is a sign of how widespread this kind of mentality is. I ignored it. Lindy West does an admirable job of taking it on. She goes straight onto my list of feminist idols.

I think an essay collection like this only works if you feel like you’d want to spend time with the writer, and that’s absolutely the case here; nobody could write like this without the intelligence and humor that would make any sensible person want to be their friend. It’s rare for one book to be by turns so hilarious and yet so topical and essential, which makes Shrill essential readings.