“We’re just running down a fucking slope carrying these little flags, and one by one we get shot and we slump and our little flags are in the mud and no one picks them up. No one is going to keep running with your flag. Lucia, no one cares about your flag. I tell myself that. When you fall down it’s over.” 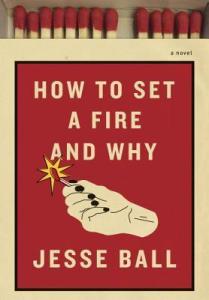 Lucia Stanton, the narrator of Jesse Ball’s How to Set a Fire and Why, is a singular creation, and one who has mostly had to make her own way through life. She was raised by three “dyed-in-the-wool anarchists.” One of them, her father, died tragically shortly before the book begins. Another, her mother, lost her mind and is now in a mental hospital. The last one, her aunt, is her current caretaker. She is hands-off and is more of an intellectual companion to Lucia than any sort of authority figure. They have no money and live in a converted garage they rent from a grumpy old man. He doesn’t like Lucia, because Lucia is pretty hard to like for anyone but the novel’s reader.

Lucia is uncommonly intelligent, but is an anarchist in the most fundamental sense. She has no recognition of authority, no patience for the social hierarchy of high school, and little use for social mores. She feels disdain for most people, impatience or pity for most of the rest, and likes only a few. Her antisocial tendencies are not a defense mechanism–they’re organic to her, and her lack of empathy and disconnection from those around her leads the reader to wonder if she might earn one diagnosis or another if she were to subject herself to a formal examination by a psychologist, which she almost certainly wouldn’t unless it just amused her. When she does sit down with her school counselor, she cuts the woman to ribbons with her sharp tongue and leaves the professional in tears.

Through the few friends she makes at her new high school (she had to leave the old one for stabbing a jock in the neck with a pencil after he stole her Zippo lighter, her totem and her only inheritance from her father), she finds out about an underground social organization called Sonar Club, which she deduces is an anagram for Arson Club.

“He said you have to burn something down just to get in, and when he said that I thought–I haven’t heard something so exciting in a long time. If you don’t like fire, you are not a living person, in my opinion.”

She quickly discovers most of the members of the club are posers and have no real interest in watching the world burn. She becomes close with the group’s leader, however, and begins developing her own philosophy of socially conscious arson, even going so far as to write a treatise on the subject (the pamphlet the group gave her on the subject didn’t impress her). She sees arson as a tremendous tool for vigilante justice and social change, leveling the capitalist playing field both physically and symbolically.

Despite the book’s title and cover and Lucia’s admittance to this club, arson and fire play a very small role in the book, and serve more as metaphors for the potential conflagration fermenting inside this powerful, brilliant, disenfranchised, slightly cracked young woman. Lucia is Shirley Jackson’s Merrikat without her fear of people or her internal discord. Holden Caufield would be too terrified of her if they met in real life to realize she holds his views of people without being so postured and unreliable. She is damn near the apotheosis of the high school outsider who is secretly far above all the jerks who keep stomping on her with their high heels and football cleats.

How to Set a Fire and Why is a delight as a work of fiction, and it’s a spiritual delight for anyone who hated high school, anyone who grew up in a weird family, anyone who still feels like they’re grinding against the grain of how the social machine is supposed to function to keep Western society productive and shiny. The only argument you could make against Lucia Stanton is that she might be a bit of a Mary Jane character, but I don’t think so. I think she’s a smart, fucked up kid, and she’s responding to a cruel, absurd, silly world in the only way that makes sense to her: by burning it to the ground.

How to Set a Fire and Why is available now at Greenville Public Library.