(Book Review) Girl in a Band by Kim Gordon 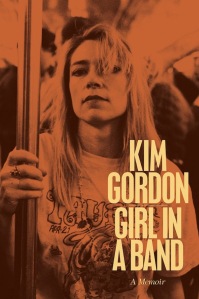 One of the trademarks of legendary and influential rock band Sonic Youth during their nearly three-decade run was alternative guitar tunings. The band’s various guitar players would change tunings, jam objects under frets, and use unorthodox methods for provoking sound from the strings (beating them with a drumstick was a favorite) to create noises that were both recognizable but utterly unique. It’s an apt metaphor for the band itself – they were both precise and oblique, melodic but fractured, sounding like a regular alternative rock band on one song and avant-garde noise auteurs on the next.

Kim Gordon, the sort-of-but-not-really front woman for the band, has lived life like she played guitar for all those years – with an alternative tuning, on beat but a beat all her own. In her new memoir Girl in a Band (782.42 Gordon) she tells the entire long history of Sonic Youth, and also takes us back to her childhood, shows us the New York underground scene before the formation of her band, and walks us through the end of her twenty-seven year marriage to Sonic Youth co-founder Thurston Moore.

Gordon and Moore separated in 2011 after Moore was caught in an affair, and the pair divorced in 2013. Their marriage had been held up by fans as proof that true love was possible in rock and roll, an exception to the rule that the demands of constant touring and the discordant nature of the artist’s life were not conducive to a lasting marriage. When the two announced the end of the line, fans were heartbroken. Many wrote to Gordon, and one of these letters is even included in the book.

Gordon spends a fair amount of time in the book talking about the marriage, the warning signs, and the painful end. She wrote the book in 2014, not far removed from the immediate pain of the divorce, and there are times when it feels like she’s airing dirty laundry, venting, more than telling the story responsibly, but I suppose this sort of tabloid content will sell a few extra books. The book opens as Gordon recalls a 2011 concert that was to be the band’s final show, occurring almost immediately after the pair separated.

“Marriage is a long conversation, someone once said, and maybe so is a rock band’s life. A few minutes later, both were done.” – page 9

The first third of the book, in which Gordon remembers her childhood and teen years, holds by far the strongest writing, and coming as it does at the beginning of the book, it sets a bar the remainder of the page count never lives up to again. Gordon feels unrushed in these early pages, reflective, and there are some lovely passages here. Once she moves on to her adult years and the advent and career of Sonic Youth, which readers will be most eager to read (the reason the book exists, if we’re honest), the book slouches off into the sort of rushed, diary-esque remembrances too many pop art memoirs fall into. If she had taken her time, worried less about including every phase and memory of Sonic Youth, made the book a bit more reflective and impressionistic, it would have been much stronger for it. Fans of Sonic Youth will no doubt enjoy the book regardless of its writing quality for the special access it grants to the band’s history and inner workings, but I hoped for more from this deeply talented artist.

Still, Gordon’s memories of the 1980s and 1990s alternative scene are fun, especially when she draws in anecdotes from other members of that scene, such as Kathleen Hanna from Bikini Kill, Kurt Cobain from Nirvana, or Courtney Love from Hole (whom Gordon has no special love for, let me tell you). While talking about producing Hole’s first album, Gordon has this ominous tidbit to share:

“At one point during the recording, Courtney told me she thought Kurt Cobain was hot, which made me cringe inside and hope the two of them would never meet. We all said to ourselves, ‘Uh-oh, train wreck coming.'” – page 191

Kim Gordon is an iconic figure in modern rock history, and her memoir is a valuable addition to the genealogy of independent rock and even the hardcore and punk scenes of today. Girl in a Band is not the slickest piece of writing, but it does take us inside one of the creative minds behind one of the most influential rock bands of the last three decades. If that sounds like your cup of tea, check out Girl in a Band today.

Girl in a Band is available now at Greenville Public Library.